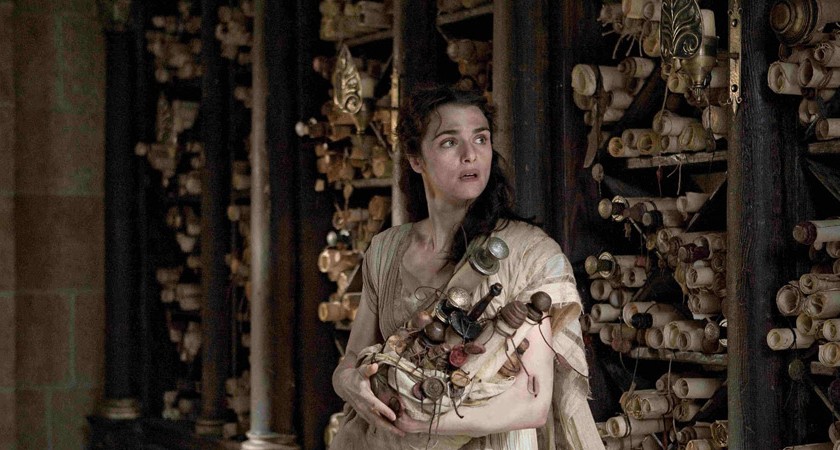 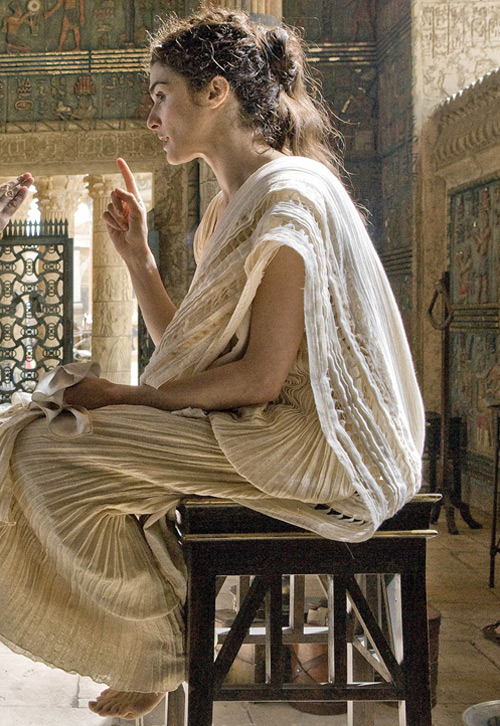 The story of the movie Agora by Alejandro Amenabar is based on real events that took place in the 4th century in Alexandria – at that time, with its Library and Platonic School and large Jewish intellectual community, the cultural capital of Europe. Yet it was a time of great political and social turmoil. The Roman Empire was in decline, and a new sect of people who called themselves ‘Christians’ became more and more prominent and was no longer willing to accept the laws and the polytheism of the Romans. In fact, they are becoming so powerful that the Roman elite, fearing the mob and already losing its power, almost entirely converts to this new religion, which means that they have to obey the leaders of this church, the bishops.

In this historical setting we meet a historical figure: a young, beautiful and brilliant woman called Hypathia. She is a philosopher, a mathematician, an astronomer and a teacher at the Platonic Academy, where the future leaders of the Roman Empire are educated. Hypathia lives the life of the mind and her greatest love is a love of truth. That is why she is all that she is, and it is because of this love of truth, combined with a profound intelligence and a truly independent mind, that she, centuries before Galileo, comes to the conclusion that not the earth but the sun is at the center of our universe. And as a teacher, as a philosopher in the platonic tradition, the main lesson she teaches her students is to have faith in the human capacity to know the truth about the good life, the right way to live.

Obviously, with this attitude, teaching and challenging the world view of this new church, she is a threat to its authority. When she is questioned about what she believes in, she answers inappropriately: ‘I believe in philosophy!’ Everybody laughs and the bishop knows enough: she is beautiful, intelligent, independent, in short: she is a witch and she must die! Hypathia is caught by a group of monks who strip her naked and brutally kill her, after they have set the ancient Library on fire with its thousands of scrolls of ancient wisdom. Blinded by their religious fever, they allow nothing to exist that is not part of their religion.

Those who have watched the movie Agora will wonder if it is really necessary to ask whether ethics without religion is possible, when the answer is so obvious. Would it not make more sense to ask the opposite question: how ethical are those who are religious? Even more so since the movie is such a strong reminder of a history of crusades, colonialism, pogroms, religious wars, inquisition, anti-Semitism and its horrors in the 20th century.

This question, too, should be addressed, but as we do not want to make the same mistake as those blinded by their religion, if we want to honor the human capacity to think, we are not allowed not to ask questions and just follow the stream of our emotions or convictions. We have to ask and to know: why? And: what does it mean?

What does Hypathia mean when she says: ‘I believe in philosophy’?

Why are we in search of ethics?

What is the difference between ethics of philosophy and ethics of faith?

What is the meaning of ‘a good life’?

How do we know what is good?

Is the good life we are looking for universal, or do we have to accept that ethics is pluriform? If so: can we, should we, still be judgmental of others, or should we accept the differences between us and them?

What did Hypathia learn from Socrates and Plato, and what is it that she must have transmitted to her pupils that was so dangerous to the Christian bishop that he wanted to kill her?

Our concern is whether, in a secular world, there can be an ethics for unbelievers, urging them to become the human beings they should be. And indeed in Socrates, the stoics and Spinoza we have found such an ethics that is equally admirable, and for which both Socrates and Hypathia of Alexandria sacrificed their lives.